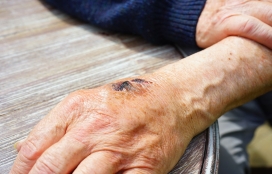 New product for chronic wound healing was developed thanks to the research results of scientists from National Cell and Tissue Center in Brno. The product is intended mainly for older patients with diabetes, limb hypoperfusion or decubituses.

The team of researchers used their experiences gained in wound healing in ophthalmology. It was announced to the Czech News Agency by Michal Zahradníček, the Chairman of the Management Board of company Primecell Advanced Therapy.

The product is called AmnioDerm and it was created according to the patented process which is the same as in other groups of products in development phase. According to Šárka Sekorová, the development leading physician, AmnioDerm is also effective for lower leg ulcers, open wounds and other kinds of skin damage which do not heal in some cases. It supports new skin growth and it has inflammatory effects in the wound, stated Sekorová.

During the research lasting five years the scientists worked with perinatal cells which are mostly umbilical cord blood and tissue cells and placental cells. They have developed a technique which preserves the cells’ bioactive molecules, especially proteins and peptides, in their original structure even after their processing. So it becomes the basis of wounds treatment and healing, speeds up regeneration of the damaged tissues.

The developed method preserves the tissue structure which creates a “natural scaffolding” for patients’ own cells. The researchers verified the product’s effectiveness and safety, obtained necessary permissions from regulators, namely the State Institute for Drug Control. According to the News Release, all conditions to enter the market have been fulfilled, wherefore the first patients may be able to undergo the treatment in the next few weeks.

Another study will follow the results of which are going to serve as a basis of negotiations with insurance companies. In the Czech Republic, the therapy will be provided by the Institutes for Wound Healing and Transplantation. The manufacture will take place in Biomedic Park 4MEDi in Ostrava.